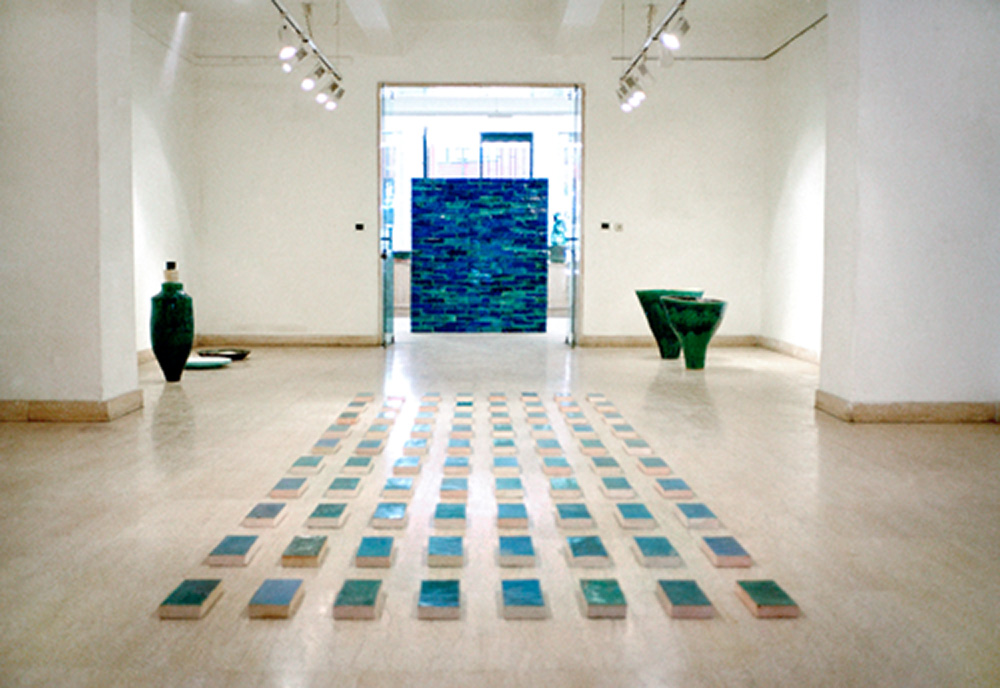 Hella Berent interviewed by Hamdi Abdin about the exhibition THE BURNT BLUE at Goethe Institute Gallery, Cairo Egypt,
in the London based Arabic newspaper Asharq al-Awsat, on page 12, 13.04.2001

Hella Berent shows a ceramic-sculpture exhibition entitled THE BURNT BLUE, inspired by the tradition of the Orient

The German artist Hella Berent considers the Orient as a key to the whole world, saying that she fell in love with the Orient long time ago. She always imagined this when started to study the oriental civilizations and their arts in China, Iran and Egypt. She admired the Egyptian “burned color” and considered it the oldest one, because it dates back 4000 BC. This love motivated her to search for its historical roots, and tried to discover its secrets in nature. For this reason, she visited Egypt and exhibited at Goethe Institute Gallery ceramic sculptures displayed as an installation, a body of work she created during her stay in Egypt, in the garden of the former East German Representation in Cairo. In an interview with her published by Al-Sharq Al-Awsat newspaper, Hella Berent expressed her love for the sound of the Arabic language, for the beauty of its scripture, for the richness of the Arabic culture. “I discovered this relation of mine in the mid 80s, coming from north, going south to Italy, exhibited my work there, then I traveled more south to Egypt where I discovered for the first time the potentials of ceramic items, and started to interact with it and create through it works saturated with my actual vision.”

HA: When started your relationship with art?
HB: Since the 70s. After my graduation from the Academy of Fine Art in Hamburg I moved to Italy and I experienced my first own studio there in 1977, then started to exhibit my work since 1979 in Italy, Germany and India. During all these years I used to have several exhibitions every year.

HA: What is it about your relationship to Egypt?
HB: My first visit to Egypt was in 1979. I did not stay long enough. Something strange happened to me that made me decide to go and encounter the pyramids. My father died unexpectedly, and I attached his sudden death with the Egyptian monuments. At that time I felt to go to Egypt getting closer to the philosophy of myths of death, which is located at the heart of the Egyptian Pyramids.

HA: Tell me about your most important exhibitions?
HB: My most important exhibitions have been the ones in which I built up an installation of “the free void”. It happened in the 80s in Hamburg at the Museum Kunsthalle. There was also my exhibition in Cologne in the same period. And in the 1990s I exhibited many works in which I concentrated on this idea, and this happened in India, Italy, Germany, the Netherlands and Belgium.

HA: When did you get the idea about the color blue into your mind?
HB: Before this current exhibition in Cairo the color blue appeared already in various works and exhibitions of mine, as pigment or watercolor. In Germany and Italy I experienced the ceramic blue glaze on bricks. I tried to express the idea of the infinite through the exhibitions of “the free void”. In Italy I showed the installation, “The Greek Field”. 80 casted same heads were equally scattered over a field of 10 by 8 lines, the number 8 as a symbol for the infinite, massive heads, not hollow.

HA: What is the artistic component that you see in the color blue?
HB: The color blue is related to purity and transparency. It also has a Sufi dimension in its depths. When you look at it you will see that the thin blue layer as a surface of the works is not a mere layer of color, but it allows many processes of inter-texture of material and correspondence with the elements of nature. For example, I see its relation with the sky in Egypt, with the blueness of the Nile; you can explore its floor when you look at its surface suggesting to be a ceramic surface, thin, fragile and soft. And there is something more I want to talk about: the depths of the blue is my own depth that represents myself, and I want to explore it in order to know the other, therefore I try to explore my self through discovering this historical color.

HA: What about the works you exhibited at the Gallery of the Goethe institute Cairo?
HB: I exhibit an installation that contains all ideas revealing from the inside. I designed the context in an architectural form inspired by the way the pyramids were constructed. I displayed on the two sides of the exhibition hall that consists of two spaces, a number of ceramic sculptures. The two rooms I separated by a blue wall construction piece, stone layers without cement or any construction materials. Therefore the outlook was less massive, more transparent for any imagination to penetrate the blue. Behind this wall, entering from the main gallery door, I displayed 80 flat ceramic pieces on the floor of the space, covered pieces of a light, transparent layer of blue that reminds us of the blueness of the Nile’s transparent surface. This alley got anchored on its two sides by singular ceramic pieces representing my personal depths that I can discover by looking at it. The ceramic pieces were designed in a circular form representing the idea of rotating around my self which developed the idea of “construction in the void” to achieve the idea of my own void, and through which I represented the idea of rotating around the self, derived from the childhood’s play rotating around things.

HA: Did you derive the idea of the wall from the walls built in the doors of the Egyptian houses?
HB: Several persons told me about these Egyptian walls when they saw my exhibition at the Goethe Institute, but my idea is not related to the Egyptian houses. It is a mere idea that occurred to me. I never saw Egyptian houses whose doors have such walls in front. Now I will look for them.